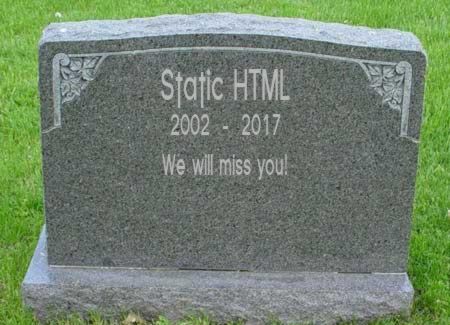 In the olden days, all websites were no more than hand-coded static HTML. There was nothing else.

As the internet matured, we were granted CSS so we could style our sites and then ASP and Perl and other programming languages so we could make our sites dynamic. Then we came up with the idea of a CMS and then social interaction and today most sites are completely database-driven with no static HTML.

But does that mean there is no place anymore for an HTML site? Nope. There’s still lots of reasons why some people choose to use static HTML over a CMS. One big reason is security. Check out the security records of the biggest CMS’s on the web, WordPress, Joomla and Drupal. Each one has had serious core security flaws revealed and sites were hacked. Still happens today in fact.

With a static HTML site, there’s little or nothing that can be hacked — HTML code is simple and allows for little or no interaction with the user. There are still developers who hand code their HTML sites.

Other reasons are performance and reliability.

But there is also another option, and that is a “site generator.” This means a tool that generates HTML code for you, based on your content and design. There situations where such a tool is ideal. In fact, SitePoint has an article called 7 Reasons to Use a Static Site Generator. Of course they also have one called 7 Reasons NOT to Use a Static Site Generator but the point is that there are plenty of reasons to use one and it all depends on the details of each site’s needs.

Popular static site generators include Jekyll, Pelican, Middleman, Hugo and Metalsmith. There’s also StaticGen which has reviews of many other site generators.

Some are meant for developers only like Roots. Some are commercial like Thunderpenny. There is Macaw which is more like an image editor that generates HTML code and Adobe Muse a similar idea.

There are also tools you can use for your CMS to generate a static HTML version, such as Wget Static and Save to FTP for Drupal and WP Static HTML Output Simply Static for WordPress.

The end result of all of these ideas, whether a site generator or a hand-coded site, is that the public-facing website is pure HTML.